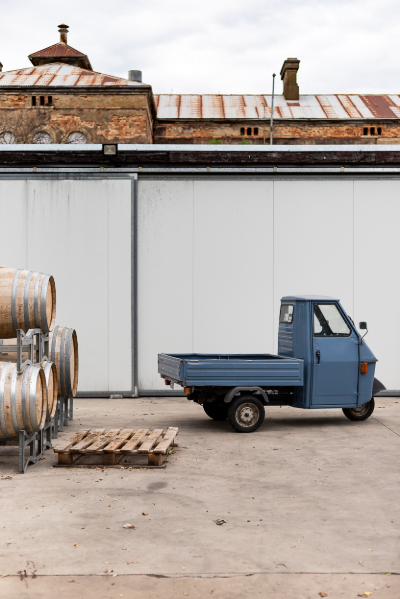 The AAVWS started out more specifically, and somewhat scientifically, in 1999 as the Australian Sangiovese Awards – the brainchild of a particularly fortunate meeting of three curious minds: Dr. Rod Bonfiglioli, Stefano de Pieri and Bruce Chalmers.

Bonfiglioli was originally a medical researcher specialising in infectious (human) diseases, but shifted to grapevine disease research at the Waite Institute in Adelaide. As often happens when wine is involved, the good doctor became utterly enthralled with his new career direction.

Bonfiglioli would screen new wine material imported into the country, before it made its way to the Chalmers nursery for potting up. At this time, Mark was working with Brown Brothers, importing new varietals for their range.

Amidst all of the collaboration between Mark, Bonfiglioli and Chalmers, Bonfiglioli was convinced to change industry once more, this time moving to Euston to work at Chalmers Nursery. His role was to help both Bruce and Mark acquire virus-free material, and to establish a certification scheme that proved it – a project that diversified and radically reshaped the range of varietals that could be grown in Australia.

Now, there isn’t too much in terms of night (or day) life in the ‘historic port’ of Euston (933km from Sydney / 483km from Melbourne), so Bonfiglioli would regularly make the hour-long trip to Mildura, where he spent nights and weekends shooting the breeze in the downstairs restaurant of the Mildura Grand Hotel. Enter chef Stefano de Pieri.

This is where the conversation all started – to initiate a variety-specific wine show, with a focus on promoting the improvement of Sangiovese in Australia. The team had succeeded in importing superior clones of the grape,, so it was high time to start producing some better wines. The Sangiovese Award initially garnered just 7 entries, but as the importation and experimentation continued, other varietals joined the fray – Sagrantino, Vermentino, Schioppettino – and so the Sangiovese Award developed into the Australian Italian Wine Show in 2000. Their success was inspirational, and gave rise to the first AAVWS in 2001, hosted by none other than the Mildura Grand Hotel – where it continues to be held each year. In 2020, there were 70 Sangiovese entries to the show, and that’s only the tip of the alternative variety iceberg.

Alternative varieties are rapidly becoming more mainstream, and when the AAVWS receives a certain number of entries to a particular variety, it progresses from alternative to mainstream – think Pinot Grigio and Prosecco. Tempranillo and Sangiovese are now getting close to the threshold, too.

‘There’s Arinto, which is Portuguese,’ says Mark. ‘Schonberger from Austria, Assyrtiko from Greece. Garganega, which is Soave Verdelho from Spain.’ It’s fascinating stuff. There’s Gamay, Teroldego, Cabernet Franc, Tannat, Schioppettino. ‘They all get chucked into the “other” category, and once all the entries are in, we see that there are 15 Schioppettinos, so they then get a class by themself.’

The show provides a platform for alternative varieties to be seen. In your average wine show, and before the AAVWS, there were simply no categories that allowed these newer wine styles to be recognised for excellence. ‘If you look at the entries for a national show in Melbourne or Sydney,’ says Mark, ‘you’ve generally got Shiraz, Chardonnay, Sauv Blanc, Semillon, other reds and other whites. You’ve got a judge who’s judging chardonnays, who then goes to judge a Sagrantino by the same measure – that’s not going to work.’ Australian wine enthusiasts still see this happening in popular wine writing and reviews – chardonnay, shiraz and pinot might get a mention, but the ‘other’ categories can be written off as novelty.

‘Wine looks how it looks when it’s by itself,” says Mark. ‘But you want to see how it sits against 20 other bottles.’ The AAVWS gives winemakers that chance to benchmark themselves against others, which is invaluable, and kind of the whole reason for entering a wine show.

As a point of difference, the judges are people within the alternative variety industry, or sommeliers who work with alternative varieties and are a bit more familiar with them – rather than the Yarra Valley Chardonnay maker who is an expert on Chardy, but might get a bit muddled by a Vermentino.

Sangiovese is still alternative, and split between fresh and juicy, and the more structured styles – the Riesling and Gewurztraminer categories are split, too. There’s Viognier, and Rhone varieties like Marsanne and Roussanne. ‘Mataro has been around for a long time’, says Mark, ‘but is still pretty small from a production point of view’, so it’s in there as an alternative variety. Durif, which (surprisingly) isn’t grown very widely, is still accepted as an alternative variety. Even the most seasoned palates can get a bit muddled after tasting 7 Durifs…

‘Why have the wine show? For the curious minds. Some people have a fixed mentality about the classic varieties – Cab, Chardy, Shiraz, but at the end of the day there’s always a group of people who want to look for something else. The AAVWS is giving them that.’